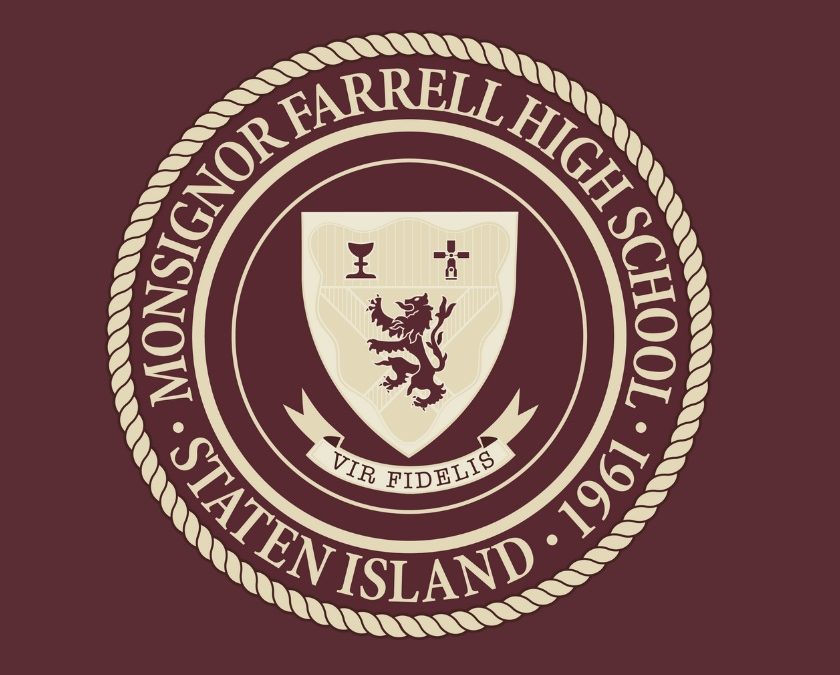 Monsignor Farrell High School is an all-boys high school located on Staten Island. Established in 1961, the school was named after a prominent Catholic priest, political and community leader, Monsignor Joseph Farrell. The school is accredited by the Middle States Association of Colleges and Schools and is affiliated with the Roman Catholic Archdiocese of New York.

Monsignor Farrell teaches their students to follow the ideals of Catholic manhood, with the motto ‘faithful man.’ The school prides itself on turning out students who have developed fully physically, morally, intellectually, and socially. They strive to ‘graduate mature, faithful men who will be sensitive and productive members of society.’

Tuition rates for Monsignor Farrell will vary slightly each year, but for 2021 the rates are confirmed at $8,750. This does not include all fees and may not include all additional costs, including participation in sports and other events within the school.

Students who are interested in a scholarship are encouraged to select Monsignor Farrell as their first choice. Students who do will be given preference over students who select the school as a later choice on their TACHS.

Monsignor Farrell High School offers both full and partial scholarships based on academic merit. Students who have performed exceptionally well on their TACHS exam and have excellent records from their middle school courses will have a chance at these scholarships. Preference is given to students who have selected Monsignor Farrell as their first choice on their TACHS forms.

Farrell is one of the most difficult schools on Staten Island to earn a full scholarship to. If your son is aiming for a full scholarship to Farrell, you may also want to consider other excellent all-boys high schools in the NYC area, such as Regis or Xavier High School in Manhattan.

Monsignor Farrell ranks as one of the top schools in New York City, with all students being placed on a path toward college prep and intellectual challenge. Students also participate in a Leadership Institute weekly, which encourages discussion that will turn them into lifelong leaders who can improve their own lives and the lives of those around them. The class includes guest lectures, current events, books, and videos.

STEM and Special Programs only at Farrell

There is a STEM program available to encourage those who are interested in more advanced math, science, technology, and engineering programs though all students are involved in technological activities. The school is also working on new labs to help enhance opportunities for their students. This program is also partnered with the Northwell Health and Engineering Tomorrow organization to help students complete volunteer opportunities, explore advanced opportunities, and engage in tasks related specifically to STEM.

The MEDI program is the Medical Education Development Institute, which is carried out with Monsignor Farrell and Staten Island University Hospital. This program affords students the opportunity to volunteer at the University Hospital, shadow departments within the hospital, participate in simulation labs, and more. This is a more advanced program than being a part of the Pre-MED Society, which Farrell also offers.

A variety of advanced courses of different levels are offered at Monsignor Farrell. These include Honors courses in English, mathematics, religion, and science. These courses are advanced over what is offered with the regular courses, but they are not quite as advanced as the AP or college courses.

Monsignor Farrell prides themselves on having advanced options for their students and is continuing to upgrade their computer labs, science labs, and all areas of technology.

All students at Monsignor Farrell High School learn under a college preparatory program that prepares them for a Regents or Advanced Regents Diploma.

Students are given individual and group guidance to assist them in preparing for college by learning not only academically but also learning life lessons. Students meet with a counselor at least once per school year to help them determine their future plans. Group classes are held every six days for freshmen and every 12 days for sophomores and juniors.

A range of AP courses are offered in nearly all core subject areas to help students in preparing for their future plans.

Scores on SAT/ACT and College Matriculation

Students from Monsignor Farrell High School received an average of 1260 on their SAT for 2020 (source). The average ACT score is 28, and 99% of students go on to attend college.

Monsignor Farrell High School is located in Oakwood on Staten Island. The campus is a large city block near South Beach and Lower Bay. It encompasses several buildings as well as green space around the school. Many Staten Islanders consider St. Joseph Hill Academy to be the sister school to Farrell.

The school prides itself on being ‘the best sports and physical education program on Staten Island,’ with a FieldTurf athletic field that’s built to NFL stadium specifications and state of the art tracks and lighting. They also have the only high school athletic complex on the island with seating on both sides and have a two-story fitness center with a wrestling room and weight room. There are also a host of sports offered at the school. Xaverian High School in Brooklyn also offers a comparable sports program.

Farrell offers 37 different activities and organizations. Students involve themselves in cultural groups, volunteer work, and hobbyist clubs. Some of these include the following: 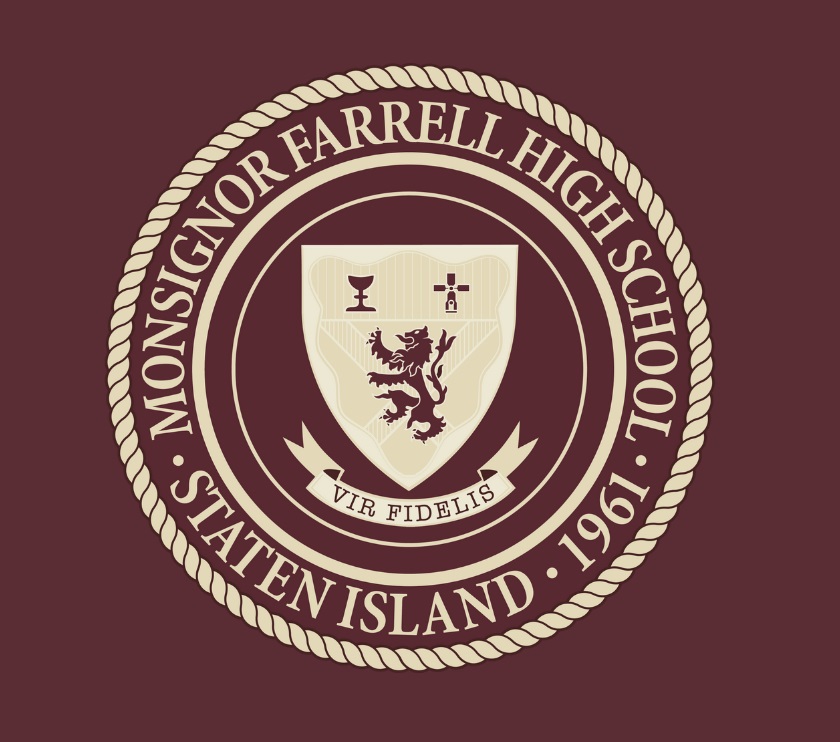 There are many famous alumni who have attended Monsignor Farrell High School, and we’ve listed only a few of them here. Alumni of the school go on to engage in all areas of academic success.

Taking the TACHS as Entrance Exam for Monsignor Farrell

Students who wish to attend Monsignor Farrell High School must complete the TACHS exam to be considered for admission. This exam is a standard for Catholic schools in the area. Students must list Monsignor Farrell as one of their three choices on the exam. Their results from the exam must be provided to the school directly from the testing facility.

The best way to prepare for the TACHS exam is through practice tests. We offer these year round about once per month. Between December and April, everyone takes the same exam. In May and beyond, students specialize for their particular test. The practice exams make sure that students do not face any surprises on test day.

You can schedule a practice test below, or you can check out this schedule of practice tests to find out more. The earlier you start, the more prepared your child will be as we begin with more straightforward exams and work our way to more difficult ones as we near the actual exam.

I work with students throughout their middle school careers to strengthen their academic skills. My students have earned over $12.8 million dollars in scholarships to NYC’s top private high schools.

Monsignor Farrell does not offer a scholarship exam. Students are eligible for scholarships based on TACHS scores and middle school grades.

Advanced tutoring, and especially sessions with small groups or even individually, will help students who are looking to get into Monsignor Farrell to get the help they need to give them a leg up. All provided material throughout the tutoring process is cumulative, so the earlier your student starts, the better off they will be when it comes time to apply to Monsignor Farrell.

As someone who scored in the 99th percentile on these exams and earned full scholarships to all high schools I applied, including Farrell as my second choice on the TACHS in 8th grade, I know the preparation and commitment it takes to succeed in getting into a private high school. My tutoring team offers group and private tutoring sessions to boost your student’s academic performance and self-confidence for the rigorous private high school admissions season.

Students often choose between Farrell and St. Peter’s, St. Joseph By the Sea, or Xaverian in Brooklyn. Moore Catholic is another Staten Island school you may consider. Many schools share identical preparation and have identical tests. The nuances of their admissions processes vary, but we can answer any questions you have about these. More information on other high schools and exams in the NYC area

My students have also earned large scholarships to high-level schools, earning over $12.8 million in financial assistance through merit-based scholarships, with 42 students passing the rigorous Regis exam. In addition, students I tutored have earned hundreds of thousands of dollars in scholarships to Monsignor Farrell High School, with countless others earning admission.

John Zaborskis tutored students to help them earn over $611,000 to Monsignor Farrell High School since 2015.

In 2022, John’s students earned a combined total of over $3.8 million in scholarships to high school.

Most students take a TACHS practice test before their first lesson to identify areas of improvement and potentially group similar students with similar goals. We also use this to compare to future practice tests to determine what is working and what isn’t. Call, text, or email us to discuss the best options for your son, including individual one-on-one tutoring or in a group. Online group sessions have rolling starts year round. You can view availability for groups and tutoring at Book Me.

Contact me for more info or to start tutoring lessons